You can order the book directly from the author.

You can order the book at your favorite retailer. 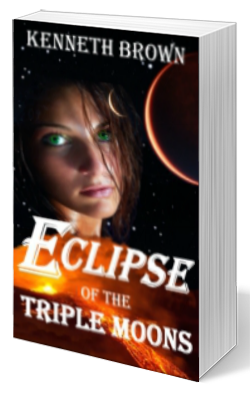 High school junior, Erik Anderson, and three friends, Lily, Al and Sherry, go through a planetary portal on Earth to a planet with three moons.

Lily is kidnapped to be sacrificed to the volcano god, Velidred, by Kestrel, the Falcon Prince. Al learns he has magical abilities and finds a powerful, magic staff. Sherry glows a weird blue color. Many people want to see Erik dead.

Can the teens rescue Lily before the triple eclipse of the moons? What secrets are dark-haired, green-eyed, Zita, hiding from the teens?

This sci-fi, action-adventure fantasy will lead you to the world of Aloheno, a world with three moons, magic, the Staff of Iswha, dungeons, strange beasts and even stranger customs.

THE LEADER: Erik Anderson talks his friends into helping him rescue their friend, Lily, after she has been kidnapped. They travel through a portal to another planet. Will they be able to rescue their friend and return to Earth before the portal closes?

THE WIZARD: Al Greystone, gawky, lanky, high school nerd finds he has magical abilities on the planet Aloheno and joins a school of magic. He thinks he is learning to use magic to engage in adventures like the fantasy Dungeon and Dragon games he plays on Earth, but finds he is training to become a warrior wizard, a war tool.

THE STAFF: The staff of Iswha is a magical staff craved by three young wizards who want its powers for themselves. The staff contains the influence of three wizards that can talk and recommend actions. Which teen wizard will gain access to its magic and can it play a role in rescuing Lily?

THE CROWN OF ANTICLETUS: The teens find the Crown of Anticletus and learn it has profound capabilities, but will they learn to use its powers in time?

KESTREL THE FALCON PRINCE: He kidnaps Lily to lure the teens to Aloheno and wants to marry Lily. But the mountain king has other plans for Lily. Can Kestrel steal the staff of Iswha and use it to his own advantage or will he lose it to jealousy, revenge and family?

ZITA: A young woman, Zita, meets the teens at an inn high in the mountains on the planet, Aloheno, and assures them she will lead them to their missing friend, Lily. What is her real purpose and will she hinder or help the teens? What effect does Erik have on her and will her response be positive or negative?

THE DUNGEON: The wizard must find his way through the castle dungeon and defeat the room without doors, giant beetles and the greatest danger, Marugotapa.

THE ECLIPSE: A solar eclipse by the three moons of Aloheno, lead to the final sacrifice with Lily scheduled as the last sacrifice during the final eclipse. Will the teens learn to use their powers, will they reach the volcano in time and do they have the skills to defeat the evil mountain king?

THE MOUNTAIN KING: In an effort to restore his magic, the mountain king has kidnapped Lily and plans to sacrifice her to the volcano god, Velidred, during the final eclipse. Each sacrifice during the three moon's eclipses increases his magic, but will he be strong enough to stop the prophecies of the teens set to defeat him?

This fast paced Action-Adventure Fantasy story has many twists and turns and forces the teens to use their wits and abilities to save their friend. But, will they reach their friend before the sacrifice on the day of the triple solar eclipse?

You can order the book directly from the author.

You can order the book at your favorite retailer.