We were watching Treehouse Masters on TV the other night. You may be familiar with the show, where someone asks the master treehouse builder to build them a treehouse. Pretty simple concept and I was amazed that someone could produce a TV show around that concept. And the show ran for eight or more seasons. Watching the show brought back memories of a treehouse my brothers built when I was a young boy. 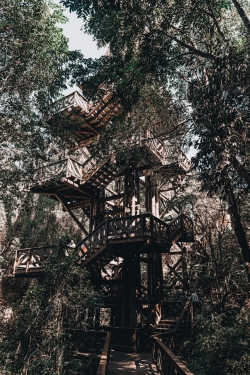 The Treehouse I Imagined

Some of the treehouses the master treehouse builders make look like the picture to the left. This is how I imagined ours looked in my mind's eye. Better looking than some homes. Ours didn't look like that.

It's fascinating watching the masters build their treehouses. They have tools, equipment and the right materials to get high in the trees, and equipment to secure the treehouse without damaging the tree. As a kid, you might not have those resources at hand. More likely you'll have some old loose boards lying around from a project your father did a few years ago. Some children can get their hands on nails and hammers, and maybe some decent strength rope.

My brothers decided to build a treehouse. I grew up with four male siblings in a rural area. I was the youngest, so I can attest I had little input into this ruinous yet hilarious event.

There's an art and a science to building a treehouse as a kid. You need to identify the right tree with branches splayed out just right for your treehouse architectural vision and the ability to climb into the tree to the point you want to place your structure. I'm guessing the structure my brothers built couldn't have been more than eight feet off the ground. It seemed high to me. As a little kid the structure touched the sky, and birds had trouble breathing when they flew that high, but thinking back on it the treehouse wasn't that far off the ground.

The two eldest brothers clambered into the lower limbs of the tree and the rest of us passed boards and segments of boards for proper placement. The first couple of boards were laid between the crook of some limbs as secure floor joists, able to withstand earthquakes, nuclear bomb attacks and the occasional snake. Once the two floor joists were placed then we passed up other boards to go cross ways over the "joists."

I gotta tell the you the truth. I'm sure you're picturing sturdy two by eleven inch lumber from the local Home Depot or the nearby lumber yard. Nope. These were planks, maybe a one by four inch piece of wood found in the garage. Why weren't the boards used on my dad's latest project? Probably because they had flaws in them. Maybe a crack or a weak knot hole or something similar.

So the joists are secured and planks are placed across as a floor. Some planks extended past the joists and others barely made it from one joist to the next. No effort was made to hammer nails into the floor. You can picture this right? If one of these boys stands outside the joist, the board will flip up and the boy will fall to the ground. The eldest boy stood in the center of the boards and declared the treehouse complete.

The rest of us are helped into the new treehouse. The view from inside the treehouse was amazing. I looked across the farmer's soybean crop and could see cars passing on the road a quarter-mile away. I remember thinking I must be one-hundred feet high to see that far. Then there was a little jostling as it became crowded with five boys.

One brother cried out, "Be careful where you step."

Another said, "Watch it. Don't push me."

Then the next thing I know all five of us are on the ground. Boards flying through the air landing on us or next to us. I don't know what really happened other than to know the structure wasn't stable. Did someone step on a segment of board outside the joist or step on the board with a slight crack on it? We'll never know. My middle brother ended up hanging upside down by his foot stuck in the crook of two branches. We pulled him down and we checked to make sure no one was injured. Then we laughed at our great adventure.

Did you build a treehouse as a child?

Photo by Rafael Leão on Unsplash