I've been cleaning up my home computer desk and decided I needed to make my docking station stand on its side, instead of sitting flat on the desk. There are two reasons I wanted to do this. I think it will make it easier to add flash drives, monitors and other devices that might need a USB port or an HDMI port.

Second, I thought when it laid flat on the desk that the piece took up a lot of room on the desk. This made it difficult to move around and hard to add or remove flash drives and stuff.

I put it on its side on Friday and it stayed up throughout the weekend, but I was worried that it would just fall over if I bumped the desk. It needed something to hold it in that position. Some of my solutions included a napkin holder, me building a holder out of wood or some other material. Then on Friday, I saw a video on Facebook that showed a picture of a US destroyer class ship built entirely of Legos. Then it hit me. I can build my docking station out of Legos.

It turns out we have a foot locker in our basement full of Legos. Originally, it was the foot locker I used when I moved into college a few years ago. The locker contains hundreds of pieces that have laid dormant for years. I waded through the different size pieces, trying to think of a building plan that would hold my docking station. I picked out many pieces and then began building my docking station holder.

Are you worried the kiddies won't have Lego pieces to play with? Don't worry, they're plenty old enough to buy their own. 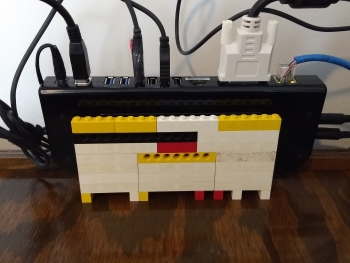 Here's a picture of how the first attempt to build a Lego Docking Station Holder turned out. It isn't perfect and the pieces may come apart in its current configuration, but it's the right size and works. I suppose with a little creativity and work, I can make it stronger and less prone to failure. Who knows, maybe I can build in a logo or something - given enough time.