It's Only Four Steps - How Hard Can it Be?

The United States has landed another research vehicle on Mars this past week. I suspect most of you have heard the news. The landing strategy NASA employed with this vehicle is amazing. There were four stages to the landing and as far as I'm concerned, something you might have read from a 1950's science fiction novel. 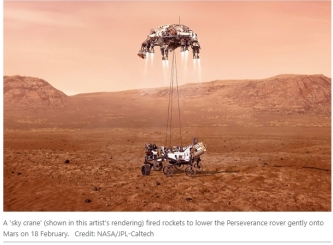 Launches can be Dangerous

Even though we launch a number of rockets and satellites into space, the launch itself is very dangerous and can fail. Then if it reaches Earth orbit, there's a risk the control facility may not be able to communicate with the unmanned object. It flies around the Earth a few times and in some cases might be sent to Venus to use Venus' gravity to gain speed to go to Mars. Anyway, seven months later the Mar's spaceship carrying the Mar's lander can be found orbiting the red planet.

Ground control is communicating with the orbiting spaceship, but it takes fourteen minutes to send a message to the spaceship. And another fourteen minutes for the spaceship to send a message back to Earth. This will require the landing party of robotic car, helicopter (drone) and scientific experiments to pretty much be able to land the craft all by themselves without human intervention. The investment to send this craft to space is enormous reaching the hundreds of millions.

Understanding that the spacecraft and landing vehicle are on their own, makes the next sequence of events challenging. If one of the steps fails during the landing the whole project fails. The people in mission control can't do anything to save the mission. There are no Triple A tow trucks sitting in space to lend a hand if something happens to the spacecraft.

Eight Steps to Landing on Mars.

Somewhere in all that is a computer program running in the background with millions of lines of code. The engineers who wrote the software and built the landing craft only get one chance for their code to run. No do overs. No, "we'll fix that bug on the next release." There is no next release. One chance to be successful or the entire project fails. I've been a computer programmer for over twenty-five years and I can tell you that is a huge ask to get it right the first time without a practice test.

War of the Worlds
I think back to the great science fiction work by HG Wells, War of the Worlds. It was published in 1897 as a serial story to a couple of magazines, one in England and the other in the United States. Then published in 1898 as a book. At that time the concept of the existence of galaxies was still being formulated, and our knowledge and expectations of the red planet was still in its infancy. Yet, HG Wells came up with a brilliant story of an attack by the Martians against the residents of Earth. Today, we think nothing about traveling to the moon and mars. There have been a number of satellites and landing vehicles sent to Mars at this time. Wikipedia shows a list of fourteen objects sent to the planet. We even have spacecraft beyond our solar system. I expect in the next ten-to-twenty years we'll have humans visiting Mars. What do you think? When do you think the first human will be sent to Mars, either for an actual landing or to orbit for a few days and then return?

If you're a huge science and space fan, then you've probably seen pictures of the landing and images from Mars. I hope you've enjoyed them and realize the complexity of the task. It really is amazing.