Thanksgiving over and Preparation for Christmas

I hope your Thanksgiving Day was enjoyable. The day for us opened with the smell of turkey, sweet potato souffle and pumpkin pie. My wife's a great cook. Too bad, we didn't have anyone to share the meal with since here in Illinois we're back on Coronavirus Lockdown. The day after Thanksgiving, we began putting up the Christmas tree and decorating the house for the Christmas Season. 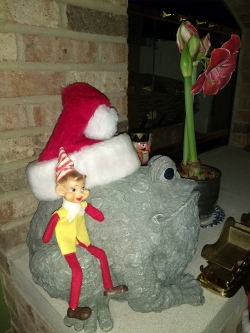 Elf on a Frog

My wife set her two Christmas elves on the frog's leg. Here's a photo of one of the elves with an Amaryllis blooming in the background. These elves have been in the family long before the elf on a shelf craze started. Both elves lost their hands and lower arms somewhere over the years, but they're still adorable.

What kind of fun ornaments, elves or family tree toppers does your family make sure is somewhere in the house each Christmas? Do you scare your children with the elf on a shelf meme to keep them in line during the holiday season? Are you one of those people who over decorates at Christmas or are you too busy and have a minimum decorating style?

Zita's revenge is in the hands of an editor right now and also a beta reader. If you're unfamiliar with the term beta reader, it's someone who reads the manuscript or even a completed book before it is published. The writer hopes this person finds those little flaws in the manuscript, such as the main character has blue eyes in chapter one and now has brown eyes in chapter fifteen. As a reader you don't like those mistakes and writer's don't want you to see those errors, though all writer's will write in an error like that and not catch it in their own review of the manuscript. The beta reader has already found some facts and wording she didn't like. Don't worry, I'm correcting those.

I'm also editing the prequel to the series, which details the life of King Haskell, long before the teenagers from Earth ruined his plans. This is still early in the process, though I hope to make it available to readers before March 2021.

The Chicago weather isn't cooperating with the Christmas season, still rather warm and no snow on the ground to put us in the Christmas spirit. I'm sure that'll change any day now.

Haskell is orphaned at a young age. He finds himself on the streets as a petty thief, but dreams of becoming a king. Haskell is captured by Gadiel's thugs and must learn to work with them or die. He finds out a secret. He has the ability for magic, but Gadiel wants to control him. He must become more than a common thief to attract the beautiful, young princess. Haskell must become a king.

Haskell - Orphan to King is the Prequel in the Mountain King Series. We recommend you read Eclipse of the Triple Moons first then read Haskell.

Zita seeks revenge on two boys from Earth. Erik and Al seek the golden crown, to rescue the Stone Warriors.